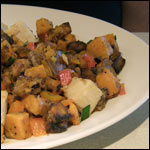 In a separate bowl, stir together the cream, already-beaten eggs, garlic, Worcestershire sauce, curry powder, paprika and salt (pepper too, if desired).

Stir the wet ingredients into the turkey bowl. (My mom will tell you to let this stand for 20 minutes, but I cheat and it still comes out fine.)

Prepare a large oven-safe skillet on medium heat with cooking spray or vegetable oil. You may wish to also preheat your oven to 375 degrees, but read a couple lines down first.

Cook the hash in the skillet for for about five minutes or until the bottom is set.

Now here you have a choice: You can stir the ingredients in the skillet and continue to cook on the stove top for about five more minutes. If you do that, the hash will be more loose when you serve it. Or option 2) put the skillet on an upper shelf in the oven and cook for 5 to 10 more minutes (until the top is golden brown). If you do that, the hash has more of a casserole consistency.

Either way, it's great. I hope you like it!


Comments About This Recipe
What do you think of Turkey Hash With Egg?
Overall Average Rating = 4 (out of 5)
Based on 2 votes.

From RyanD
So, I don't want to totally trash this recipe as I was slightly deviated. I didn't have any red peppers or parsley or mushrooms. And I added some of my creamed corn in its place. I imagine this recipe is better with those items, but I can't imagine it's much better. This had such an overwhelming turkey flavor (I know, I know, of course it has turkey in it). But it just tasted too turkey - like for it to be appetizing. I like the idea and if I were to I it again, I'd use sausage/ leftover stuffing instead of the turkey, or at least for half of it. And I'd also put the onions in first so they cook faster. This took me closer to an hour to make, and I ended up not eating it.

From AzJazz
This came out awesome, and is a perfect way to get rid of those Thanksgiving leftovers! I made a few modifications (to meet my wife's tastes and our refrigerator supply): We didn't use the bell peppers or onions, though for me they would just add more depth to the overall flavor. (I used 3x as much mushrooms instead to make up for bulk). I also used mashed potatoes instead of cooked cubed (Hey, it was from Thanksgiving leftovers!). Just make sure that you add them in cold while the mashed potatoes are more "solid", and try to keep the mashed potatoes in largish chunks by not overmixing the final ingredients. The flavor of the potatoes was just fine, and the texture was fine, too. - The cooked cubes would have probably made a more chunky hash, which is cool.

Also, since it was just for my wife and myself, I made a half-recipe. One thing I found was that making half the liquid didn't cover all of the solids, so I made the full amount of liquid ingredients to mix with the solids. The result was great!