Name me something more versatile than eggs.  You can fry them.  You can bake them.  You can boil them.  Think of a verb and you can probably do it with an egg.  Once you’ve decided how to prepare the eggs, that’s when the fun really begins.   What do you put in the eggs?  What goes on top?  I’d be hard-pressed to think of any one ingredient that couldn’t be used with eggs in some way or another.

Nowhere does the flexibility of eggs shine as bright as in the omelette.  It’s a structure.  People who make great omelettes should be called omelette architects.  An omelette has a foundation.  Will it be just eggs?  Do you add  a touch of milk for a softer structure?  Do you add a pinch of flour for a firmer structure?  Herbs and other ingredients can be added within the beaten eggs resulting in flavor-packed art deco effect. 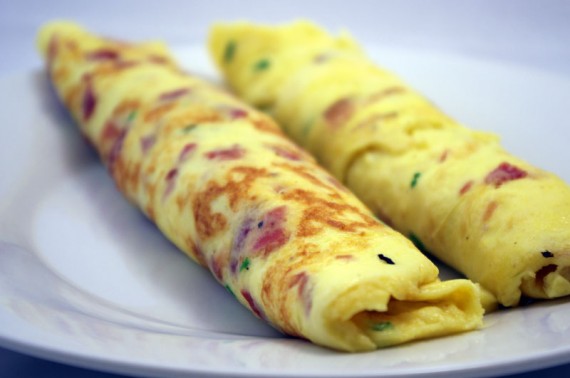 The omelette featured here might look modern, but it’s actually based on an old German recipe.  I adapted if from a 1955 cookbook from Narcissa G. Chamberlain called The Omelette Book.  That book was a favorite of cooking legend Juila Child who displayed it prominently in a show she dedicated to omelettes.  More on that special book later as it deserves a post of its own in the near future.

Speckled with chopped bacon and chives, this omelette is beautiful and delicious.  The thing that makes it unique to regular-Joe omelette eaters is the shape.  A little flour is added to the egg, like a crepe, so it’s a little more pliable. Then, it’s rolled – sort of like a cigar, so each bite is essentially a dense swirl loaded with flavor.  The spice of distinction in this omelette is nutmeg. 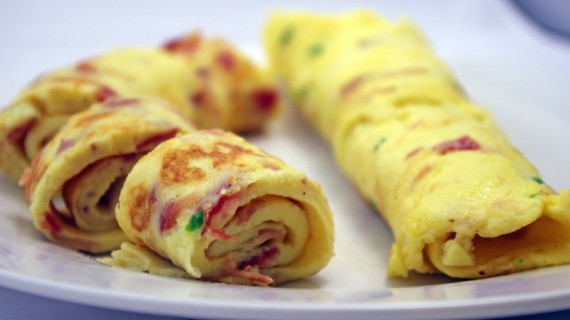 This isn’t an omelette for filling.  The fillings will squeeze out as you roll it into shape.  I learned that obvious lesson the hard way.  I do find this omelette perfect for the old-school practice of topping with a sauce.  If you have some country gravy leftover from dinner, you have a sauce.

To make a simple cream sauce, just place a small sauce pan over medium heat.  Melt 1 Tablespoon of butter, stir in a teaspoon of flour and then gradually add 1/2 cup of milk or cream.  Season with salt and plenty of pepper.  Simmer and stir until thickened.  Spoon that good stuff over your omelette and – wham, bam, thank you mam – the result is amazing.

So whether you make this recipe or are just inspired to try omelettes in a new shape, remember that you are an omelette architect building the best structure known to man… breakfast!  Enjoy! 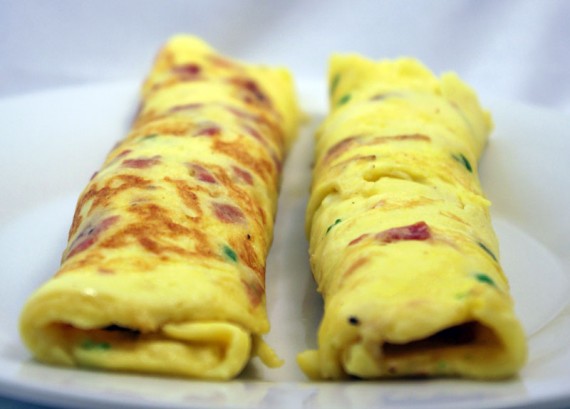