How To Make An Omelette Puffy

The trick to making an omelette light and puffy is beating the egg whites separately from the yolk. Beat until stiff peaks form. An electric beater is a big help. To really maximize the amount of volume you get, add a pinch of cream of tartar to the whites as soon as peaks start to form and continue beating.

The beaten egg whites are then gently folded into your other omelette base ingredients (presumably the egg yolks, milk or water and seasonings).

Since this method produces a big, bulky omelette, it’s best to cook the top of the un-folded omelet in a hot oven until the egg is almost completely set. This will also give you more “puff”. Since it’s more fragile than other omelets, you risk breaking it if you flip it or manipulate the edges to finish cooking it.

So, that’s trick. Here’s the recipe:

May your omelets be light and your days be bright! And have no fright if you omelette ain’t right. Don’t fight what’s right… if your omelette breaks apart you still have a delicious scramble. 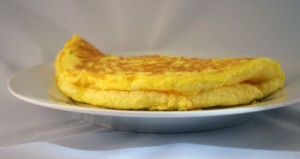