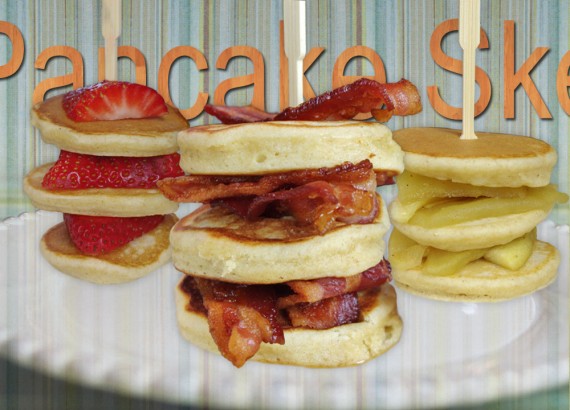 This is such a simple and fun concept, I’m surprised it’s not already wildly popular.  Basically, all you do is make tiny pancakes, chop some fruit and stab everything with a toothpick.  Any pancake batter will do.  I like to use a popular pancake recipe on MrBreakfast.com.  But you can just as easily use Aunt Jemima or another pancake mix. 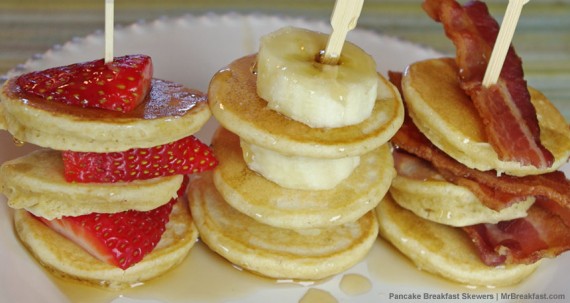 I’ve seen a few examples on the internet of people using strawberries, bananas and apple slices, but I thought it’d be fun to take it a few steps further.

Make pancakes about the size of 50-cent pieces.  I’ve found that 2/3 Tablespoon batter per pancake gives you the right size.  In the picture above, the pancakes to the left were actually too large.  The ones on the right, as Goldilocks might say, were just right.  Be sure to have some maple syrup standing by as a dipping sauce. 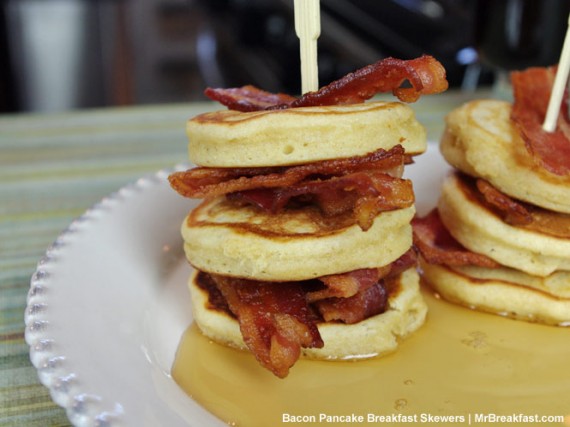 The way my mind works, I immediately thought of bacon. 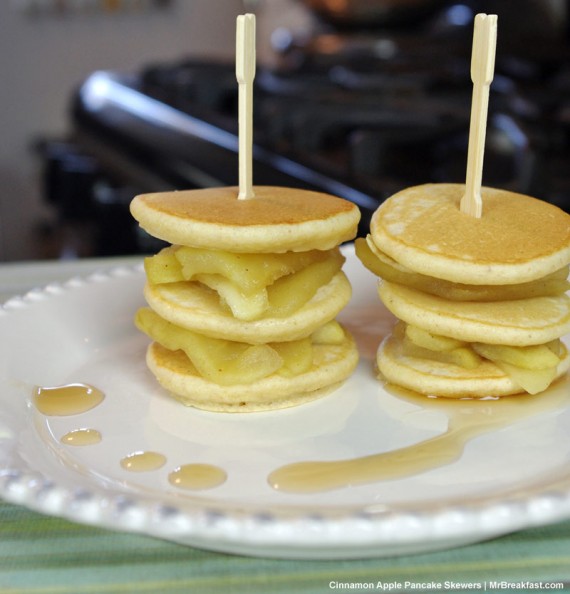 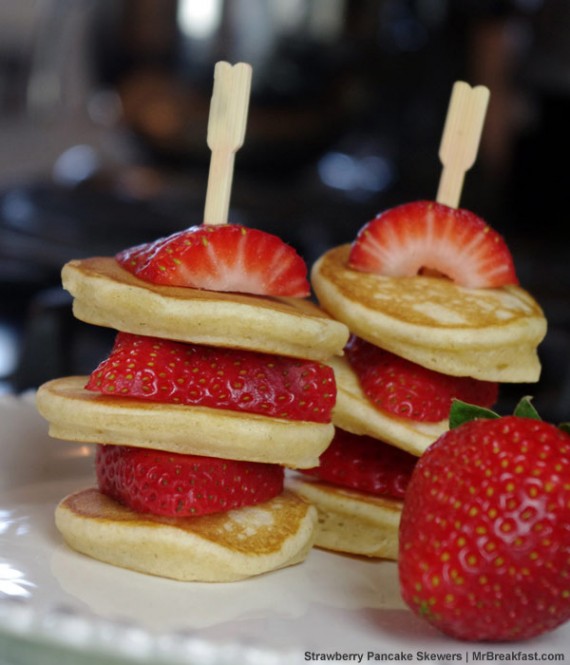 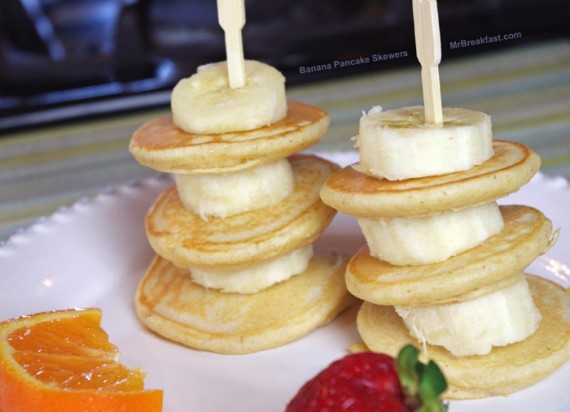 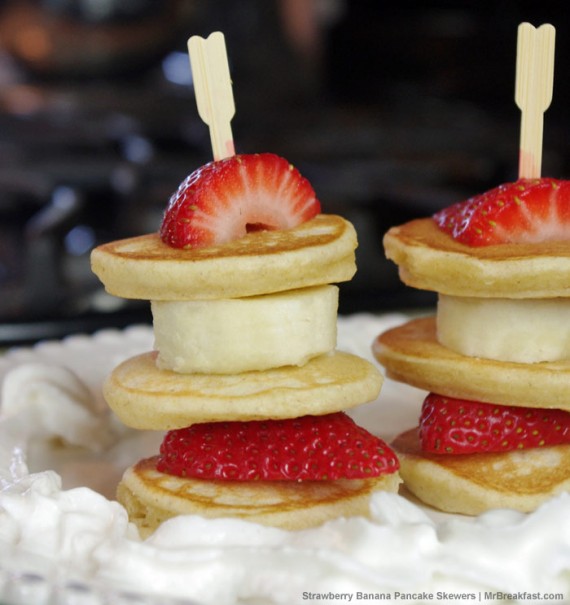 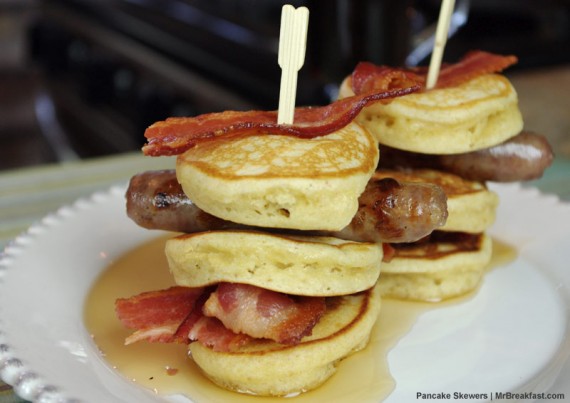 The bacon and sausage pancake skewers were a little unwieldy, but I mean… you can taste them with your eyes, right?  If I had a do-over with this one, I’d probably use small sausage patties instead of links. 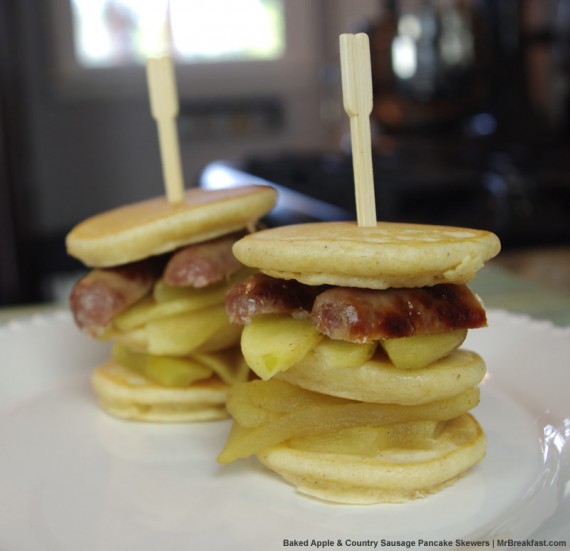 This was the start of my hyper-experimental phase:  Baked Apple & Country Sausage Pancake Skewers.  There’s nothing particularly “country” about the sausage.  I just liked how it sounded in the name. 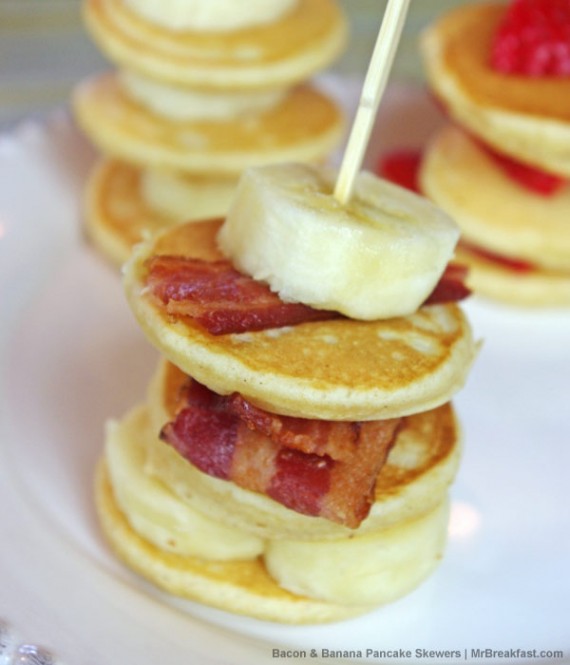 Towards the end of my Pancake Skewer Breakfast Party, I was going a little insane.  However, there was magic in my madness that resulted in the bacon and banana pancake skewer.

I’d dipped most of the other skewers in maple syrup.  For this one, I put some creamy peanut butter in the microwave for 20 seconds so it had more of a sauce-like consistency.  I liked it.  If he were alive today, I think Elvis Presley would have liked it too. (That’s a reference to the famous Elvis Presley Breakfast Sandwich.)

For as many pancake skewers as I made, I feel like I’ve just scratched the surface. The possibilities seem almost endless.  What about a ham skewer?  A pineapple skewer?  How about a ham and pineapple Hawaiian pancake skewer?   If you have an idea for a skewer, let me know in the comments section below.

Here’s wishing you a fun and successful Pancake Skewer Breakfast Party of your own!